The Port Museum of Tricase

Investing in culture and nature

At the center of the protected area of the Regional Natural Park “Costa Otranto, Santa Maria di Leuca e Bosco di Tricase”, there is the Port Museum of Tricase, the Ecomuseo of Venus , the ancient Portus Veneris.

The Port-Museum is born from the synergy implemented by the Municipality of Tricase , by Magna Grecia Mare Association (organization manager), the Mediterranean Agronomic Institute of Bari (CIHEAM Bari), the University of Salento and the Regional Park “Costa Otranto, S. Maria di Leuca and Bosco di Tricase”, and from the territorial cooperation between Greece and Italy (Interreg 2007-2013).

This is a unique and precious example of a museum made out of a port, its sea, its coastal territory and particularly its people and their traditions and heritage. It is one of the very few models of economic, social and environmental growth applied to a coastal community projected in the Mediterranean, a perfect and concrete example of the concept of durable sustainability.

As a result of that and following the favorable opinion expressed by the Regional Council for Ecomuseums, on the initiative of the Department Tourism, Economy of Culture and Valorisation of the Territory of the Puglia Region, now the Port Museum of Tricase has been formally recognized as “Ecomuseum of regional interest” (Deliberation No. 1182/2017 of the Regional Council, pursuant to Regional Law No. 15/2011). 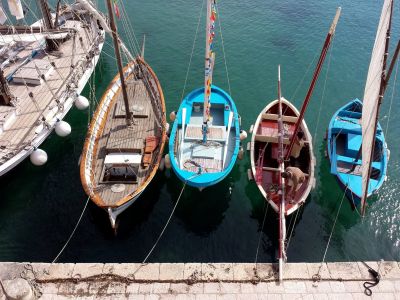